All Collections
Watch Your Hack. Protect your password and keys.
Chatting and phone calls 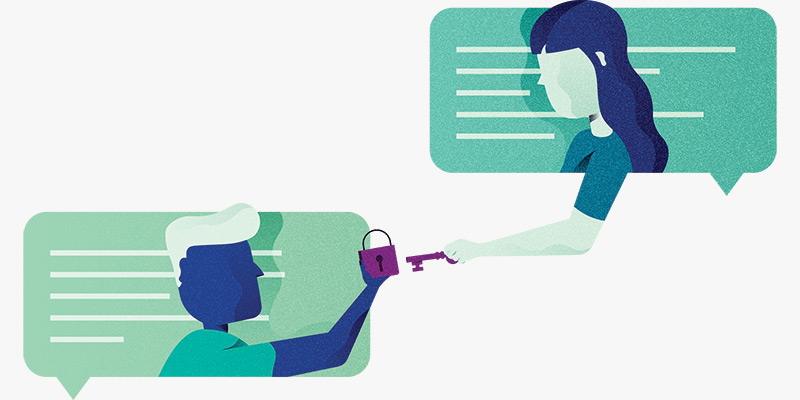 We send lots of messages 💬 and still call ☎️ from time to time. Let’s try to do that as safely as we can. This chapter is about how you can communicate without anyone listening in or reading your messages.

Communication has become a lot safer since April 2016, which is when WhatsApp introduced end-to-end encryption. This ensures that only the sender and receiver can read the messages sent between them. If someone were to intercept end-to-end encrypted messages, all they would see is gibberish.

WhatsApp is owned by Facebook; a company that makes its money by collecting as much information about its users as it can. Because of end-to-end encryption, Facebook doesn’t know what kind of messages or pictures you’re sending. Facebook can monitor who you’re communicating with. This type of information is known as metadata.

What chat app you use is a very personal choice. Some people value ease of use, while others prefer apps that focus more on protecting their privacy. These are five alternatives to WhatsApp.

Signal is the safest and most privacy-friendly chat app. Just like with WhatsApp, the app can be used on a computer and it’s possible to have it automatically remove messages after a specified period of time (from a few seconds after being sent to a week). Signal also hardly saves any information about its users. The app doesn’t look very nice, however, and has fewer features than its competitors.

Telegram is not a safe choice, because it saves messages in the cloud. Some people like this, because if you switch phones you can start chatting exactly where you left off. Saving all your messages, pictures and videos in the cloud is very risky, however. Please be aware of this if you use Telegram. The reason why people choose to use Telegram is because it’s one of the most user-friendly chat apps out there.

Apple’s chat app only works with iPhones and iPads. Messages are encrypted with end-to-end encryption and you can also use your MacBook or iMac to send and receive messages. iMessage also supports a lot of other apps, letting you easily order an Uber or share a navigational route, for instance. Note that Apple does save metadata for up to a month.

The Swiss Threema is a favourite among journalists, because you only share a username to communicate with each other. Journalists don’t have to give out their phone number to use Threema. The app has a fancy design and lots of features. There’s one downside: Threema costs 3 USD. As a result, it doesn’t have as many users as the free apps.

Wickr Me is comparable to Threema: you don’t need a phone number or email address to create an account. You can set messages to be automatically removed after a specified amount of time, use the app on multiple devices and create groups. Contrary to Threema, Wickr Me is free.

The Swiss Wire garnered a lot of fans in a short period of time, which isn’t strange given its features and design. The app bases its encryption method on Signal and combines a sleek design with Telegram’s flexibility. That means you can chat from your smartphone, computer and via your internet browser. Video calls, file sharing and sending gifs are all protected by end-to-end encryption.

Hackers can’t steal what you don’t have. That goes for chat messages too. If you’re having sensitive conversations, make sure those messages are automatically removed 🗑️. Signal, Telegram, Wickr Me and Wire support this feature, amongst others.

You can use WhatsApp, Signal and FaceTime, amongst others, to make end-to-end encrypted calls. This means that the service you use to make the call can’t see or hear you. These apps are recommended when you make a call to discuss sensitive topics. If you want to Skype with your cousin from Australia every now and then, its lack of end-to-end encryption won’t matter much.

A regular old phone call is a safe communication method for most people. A hacker can’t easily hack your phone call 📶. That would require a targeted attack, carried out by an intelligence agency, for instance. We’ll talk more about that later.

Email 📨 isn’t safe, contrary to many chat apps. Email in 2018 consists of several different technologies cobbled together to make it all work. That doesn’t make it safe or reliable. We use email in business situations and because it’s commonly accepted, but send as little sensitive information through email as you can.